Our April Trooper Spotlight is Bobby Linn. Bobby wears many hats in the legion; between being one of Starkiller Garrison’s GML/GWL and events coordinator to the Imperial Gunnery Corps detachment XO. You can learn more about Bobby below. 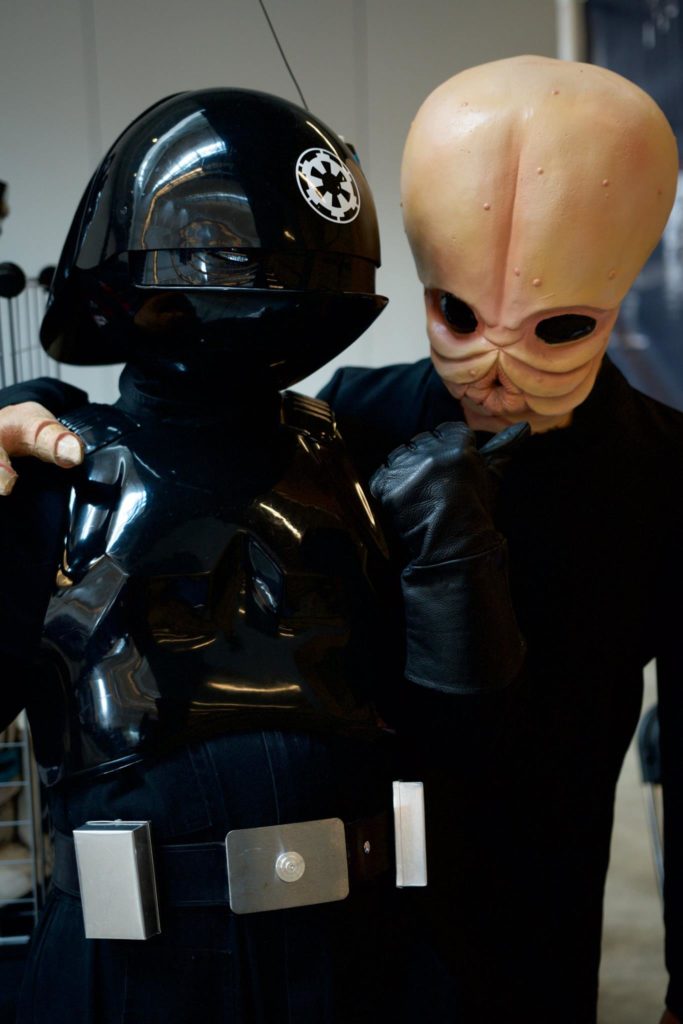 When did you join the 501st and why?
“2013 – I’ve had a life long obsession with Star Wars and being a part of the 501st and its peer groups gives me an outlet for that while doing cool events and wearing great looking costumes.”
What was your first costume you got approved in?
“Warrant Officer (now retired)”
How many costumes have you been approved in or do you own now?
“14 in the 501st but 29 total including other Star Wars peer groups such as the Rebel Legion.”
Do you have any stats off hand that you’d like to brag about? Number of troops done, number of different states/garrisons trooped with, etc.
“At the time of writing this I’m the Costume Reference Library (CRL) model for 4 costumes (Bith Musician, ISB Officer, ANH TIE Pilot, and Imperial Gunner), I was the first 501st approved Bith Musician, and I still hold the world record for most events done as an Imperial Gunner.”
If you have multiple costumes, what is your favorite costume to wear and why?
“The Imperial Gunner is what I’m most known for, and I love it due to mobility, comfort, and an awesome looking helmet. I also love being a Clone Trooper for that “wow!” factor I get when people see me in armor. But sometimes it’s nice playing the part of a good guy too from time to time and getting to be nice and friendly with the fans.”
Do you have a favorite event you’ve done or special memory you’d like to share?
“Of course the Make-A-Wish events and hospital visits will always have deep meaningful resonance and are a constant reminder of the simple good that can be done by wearing these costumes. But one of the coolest events I was fortunate enough to participate in was Disney’s Star Wars Weekends. Star Wars Weekends (SWW) was, in short, a Star Wars convention inside Disney’s Hollywood Studios. They had celebrity guests, special merchandise, events, panels, and a parade of characters through the park. During a vacation to SWW I proposed to my wife (in front of Star Tours) and we watched that parade, seeing that parade and hearing that all the characters marching were 501st and Rebel Legion members was what pushed us to finally join. A year later on our honeymoon we marched in the parade, and got a special shout out during it from the stage hosts (a recording of that day’s parade can be found here – https://www.youtube.com/watch?v=uUlHojGnl9E). It was an incredible experience that let us live out some life long fantasies and meet fellow legion members from all around the globe.”
Do you have any advice for potential new members or our newest members?
“1. Ask questions. If you don’t ask you won’t learn, if you don’t learn you’re going to make expensive mistakes.
2. Go to events, help out, meet people.
3. Get to know members, say hi and introduce yourself, we were all the new person at one time, we know how intimating this all can seem and we want to help and grow.”
What do you do for a living?
“Graphic Designer”
What are some other things you like to do outside of the 501st?
“Read, create art, watch movies, table top gaming, travel around to various conventions”
Who is your favorite Star Wars character?
“Grand Admiral Thrawn”
Other than Star Wars, what other fandoms do you like?
“Hellboy, Doctor Who, Muppets, Disney, Star Trek, Marvel”
Is there anything else you would like to add that we might not have asked?
“If you’re interested in joining, just do it. Meet people, learn, try to enjoy every minute of it. I wish I would have started my journey in the Legions sooner.”