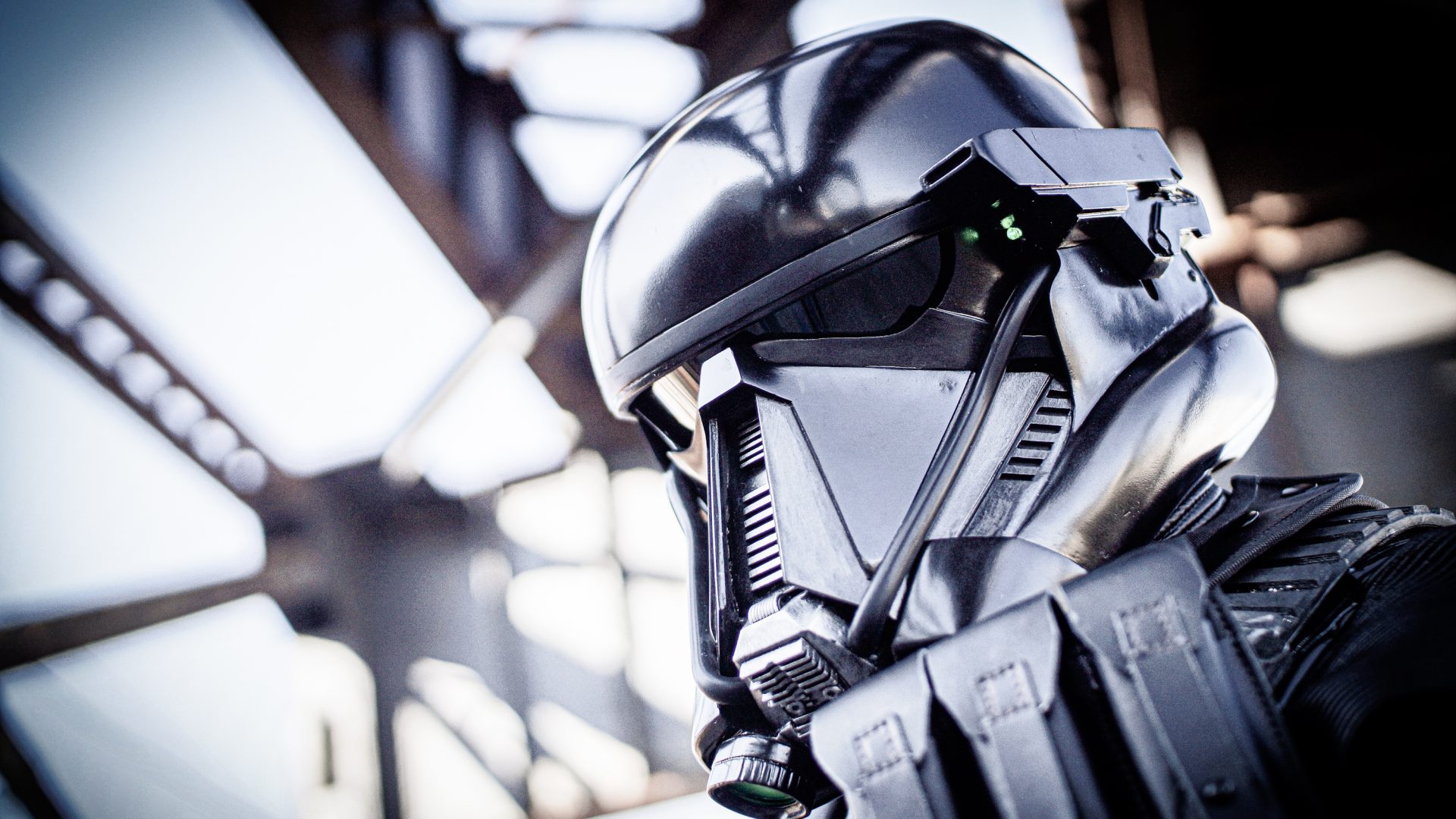 For May we are taking some time to get to know Patrick S. A 501st member since July 2018. He brings a super fun presence to each and every troop that he attends. Afterwards, he is always one that is so much fun to chat and hang out with.

What was your first costume and why was it your first?

My first approved costume was an AHN stormtrooper. I always loved the classic TK. I can’t tell you how many times over the years that I took literature from a 501st booth at a con but never acted in it. But.. as usual, my granddaughter became the driving force to push me off the end of the diving board. . She was 3 and picked out a kids TK costume at the Halloween store… and when she said, “Pap… you need to be a stormtrooper too”… well that sealed the deal. The road to approval began…Eight months later, I was approved as TK-22471

Do you have a costume that you would love to build one day, what costume is it?

I’ve noticed that the only two costumes that get a much  bigger ‘pop’ from the general public than my TK  are Vader and Chewie. I’d love either.
Honorable Mention: I suppose that now Mandalorian has given us a dad-bod middle-aged Boba Fett.. it lends hope for a more accurate costume for me!

Hands down, UPMC Children’s Hospital visits. There is something magical about the whole visit. It’s an event where you can make an actual difference. In that place, when you put on that costume, suddenly you are on the same level as a Sidney Crosby or a Troy Polamalu when they walk those halls. And somehow, it’s ALSO the most humbling thing you could ever experience.  That few minutes of distraction from their treatments, it’s worth more to those kids than can be put into words, and they honestly truly deserve every last smile that you give them.

Do you have any advice for potential members or our newest members?

Those first-troop jitters… Find your comfort zone. Be a squire for several kinds of events…. Get a feel of how things work and then wade into the fray. Maybe you are a giant crowded Con lover, with 25 other members that you can blend in with… or maybe more of a small library troop with 3 or 4 other troopers. There are so many opportunities in his group, and after a year of COVID lockdowns, I expect some real energy and enthusiasm for a huge variety of events.

What is your favorite Star Wars film?

So hard to answer this. I’ll have to say A New Hope, as I think it was the first non-Disney movie (ironic) that I ever saw in a theater. I was 6 and it blew my little mind…It was so far above ANYTHING else out there. An unpopular opinion, I also loved Episodes 1 and 2… Yes I hated the CGI, but I had waited over 20 years to see lightsaber battles on that scale. Maul and Dooku fight scenes still give me goosebumps.

What are some hobbies that you enjoy?

If you could travel the galaxy in anything, what would it be? Where would you go?

Who could say no to a trip in the Falcon? Although, I think I’d like to take a Star Destroyer, with all that it would have on board, to Endor moon… I’ve travelled to California to see the redwood forests twice in my life… yea, Endor would be amazing.

Do you have a nickname?  How did you get it?

Not really. I’m open for suggestions though…

What does trooping together mean to you?

For me, it’s like being in an improv troupe, you hit the event like hitting a stage, and you make up the performance as you go along. You start clicking with people and trying to get the people into your show. I prefer the goofiness over the seriousness, and I gravitate towards the silly side. And no matter how different we are as individual members before and after a troop….when the suits go on, we’re ALL just Star Wars fans giving back.

This month we are taking some time to get to know Bryan. A 501st member since August 2016. He has been on countless troops and has been a great addition to everything that we do within the community.

What was your first costume and why was it your first?
The Empire Strikes Back Boba Fett. It’s honestly the only costume I have ever wanted. Ever since I was a kid back in the 80’s. Nothing, I mean NOTHING looked cooler than Boba Fett. Boba is my one and only.

Do you have a costume that you would love to build one day, what costume is it?
Probably Boushh (for my wife), but she’s not into the costuming gig herself (although she’d be perfect for it.)

Do you have a favorite event you’ve done or a special memory you’d like to share?
Lots of wonderful, memorable moments, but if I had to choose one, it’d be having Easter breakfast with Jeremy Bulloch and his lovely wife, Maureen in Washington DC a couple of years ago. We emailed back and forth for a couple of months to figure out what would be best for them. It was such a wonderful experience to get to talk about how good the bacon was and every other regular life thing other than Star Wars. He truly was the kindest man and his wife was his rock. You could see that. He will truly be missed.

Do you have any advice for potential members or our newest members?
Choose what you love most about Star Wars and rock it like you ARE it. Getting to escape for a while in the disguise of Boba Fett is an incredibly fun experience. Find which character(s) will give you a similar experience.

What is your favorite Star Wars film?
The Empire Strikes Back, of course. It was the first film I ever saw in a movie theater at four-and-a-half years old and I ACTUALLY remember parts of the experience!

What are some hobbies that you enjoy?
In addition to Fett-ing, I love to write and play music (I am building a home studio at the moment). I have a passion for astronomy and I wish I had more opportunities to get my telescope out (stupid Pittsburgh cloudy nights). Other than that, I love watching my daughter grow up, spending time with my family, and going to the theater.

If you could travel the galaxy in anything, what would it be? Where would you go?
Do I really need to answer that? Slave I ALL DAY. I don’t know where I’d go, but I would look so cool on the trip.

Do you have a nickname?  How did you get it?
Kind of. All of my Fett family refer to me as “Young Jeremy Bulloch”. It all started with a photo of me in my kit with my helmet off (for 501st trading card). By absolute coincidence, it was the mirror image of a behind the scenes shot of Jeremy Bulloch in Fett with his helmet off. Now I don’t see the resemblance but my friends freaked out about how I apparently “look like a young Jeremy Bulloch.” It became a running thing and I grew to accept it. Lol! Jeremy himself even got on board with it, so I had the two images superimposed and had Jeremy sign it (after a playful exchange at Awesome Con).

What does trooping together mean to you?
Honestly, there is nothing else like it. The common bond I have with other garrison members is something really special. We all come from different walks of life, but these plastic space men and women and droids, and aliens, and… bring us all together to do some truly amazing things. I know everybody says this (because it’s true), but seeing how happy children young and old get when we show up somewhere is so rewarding. The Childrens’ Hospital Visits are when I am the proudest of what we do. To be able to bring joy to those little angels and their families, even if just for a couple of minutes, is worth every single bit of blood sweat and tears that went into getting these costumes as superb as they are. Trooping is in a league all of its own, and the people in Starkiller are the main reason for that. 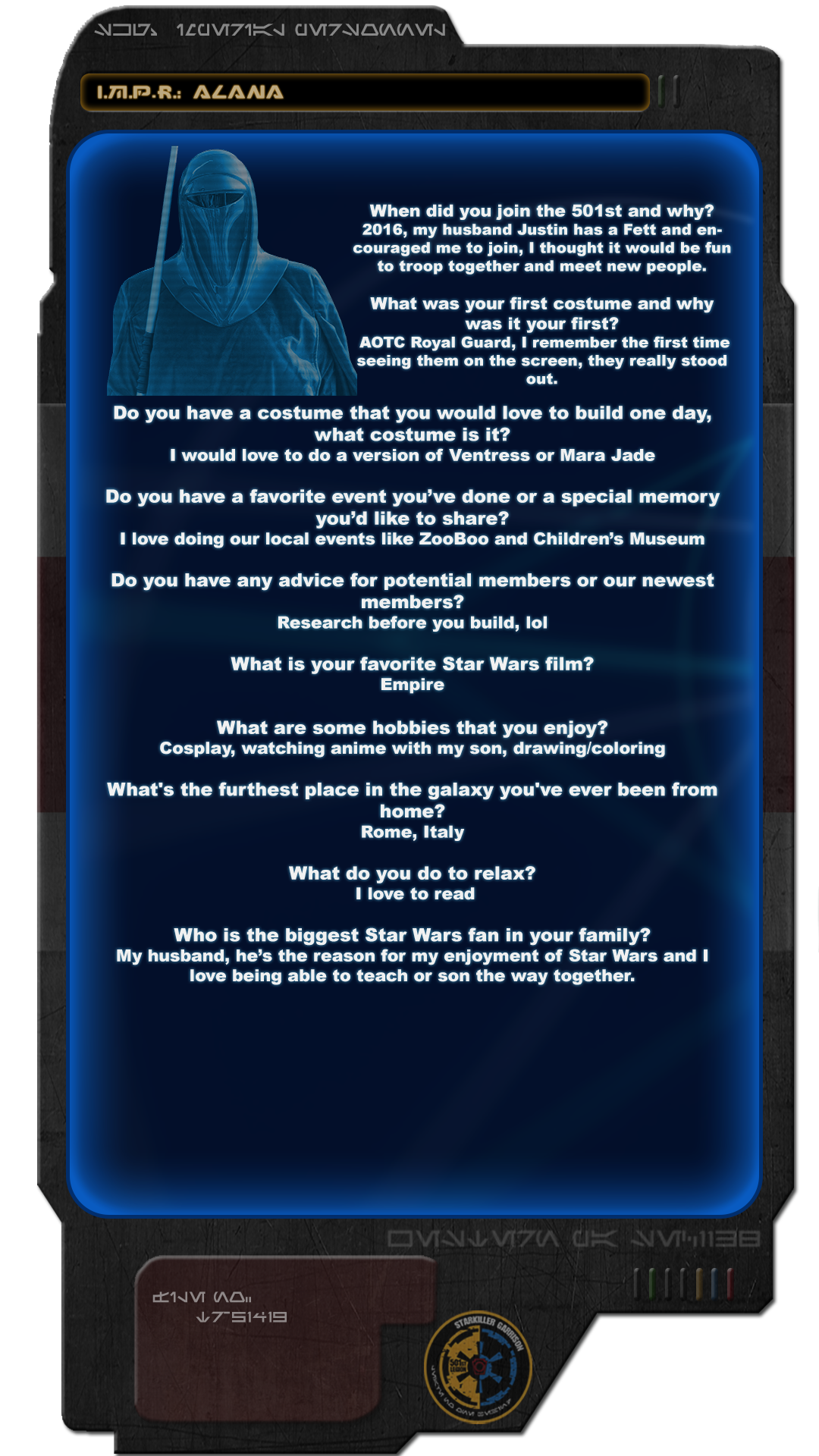